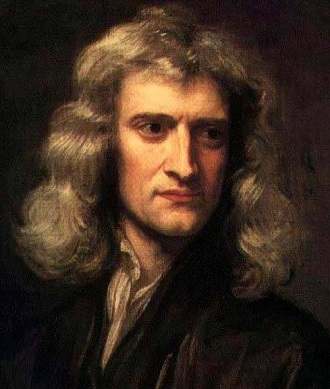 Isaac Newton was an English scientist with specialties in physics and mathematics who is renowned for being one of the most influential and important figures of the 17th and 18th centuries.

He was born on December 25, 1642, in a small town called Woolsthorpe-by-Colsterworth in the county of Lincolnshire. His birth was premature and Newton was said to have been tiny at birth. He never met his father, also named Isaac Newton, who died three months prior to his birth.

His mother, Hannah Ayscough, remarried when Newton was three and went on to have three children with her new spouse. Newton was left under the care of Ayscough's mother, Margery, and reportedly disliked his stepfather Reverend Baenabas Smith a great deal.

On June 1661, Newton began attending Trinity College in Cambridge after his maternal uncle's recommendation. Trinity College taught Aristotelean truths as well as more modern philosophy from the astronomer Galileo, Descartes, Thomas Street, and Johannes Kepler. With this basis of instruction, Newton created his own list of questions about any gaps in the collaboration of mechanical philosophy. From his questions he discovered the binomial theorem, which was the foundation of his original theory, calculus.

For two years, Newton continued his studies private back in Woolsthorpe where he expanded upon his theory of calculus and developed the foundation of his theorems on the law of gravitation and optics. Newton would return to Trinity College as a fellow in 1667. However he did not wish to become an ordained priest, as was the custom at the time for fellows.

He arrived back at Trinity College with a series of papers on the subject of calculus that were hailed as being hugely beneficial and advancing to every facet of mathematics. Newton was praised for being a young genius, though a controversy soon arose that had the creation of Calculus being attributed by some to Newton and some to Gottfried Leibniz. It is believed by most scholars that the two mathematicians created parts of the theory independently from each other, each omitting certain aspects that would eventually be combined for a complete explanation of calculus. The feud over publication dates and the ownership of the theory would continue until Leibniz died in 1716.

In 1669 Newton was named the Lucasian Professor of Mathematics. Newton escaped the fate of being compelled to become an Anglican priest because of a loophole that allowed a professor of mathematics to devote more time to science than religion. King Charles II accepted Newton's request to not have to follow holy orders and he was able to continue his work as a fellow without being ordained.

Newton next developed his theory of optics and spent the years working to experiment and demonstrate his theory on the dispersion and behavior of light. He began recording his studies in notes collected and entitled Of Colours. Some elements of his theory of optics were questioned by Robert Hooke, a well known natural polymath. The criticisms made Newton insecure and he withdrew himself from a public exploration of optics. His absence from this debate compelled him to begin work on his law of universal gravitation.

Work from this Of Colours and his 1675 book Hypothesis of Light went on to be expanded upon for his book Opticks, published in 1704. Newton was influenced by the Henry More, a theosophist who explored existence and dimensions of the soul. His prior attraction to the concept of alchemy was revived as he explored the occult and how it could influence natural philosophies. His connection between the occult contributed to his theory of gravity.

At the same time as his work on optics Newton was exploring the orbit of planets within the universe. The timing of his exploration of optics and planetary motion was a good combination with which to create his theory on gravity. Newton's first series of papers on universal gravitation were included in 1684s edition of the Royal Society's Register Book. It was the genesis of work that would go on to create Principia, published in 1687 and sponsored by Edmond Halley.

Principia was based on Newton's naming laws of motion that were universal. The three laws together create the foundation of classic mechanics, which jumpstarted innovation during the Industrial Revolution. He combined a geometric platform based in calculus theory to define his law of universal gravitation.

His suggestion that a portion of the law depended on the invisible force created a stir amongst those who found the concept of occult ideas being present in science disturbing. Newton didn't give these criticisms much weight and responded to them by insisting the theory of gravitational attraction was sound. Principia garnered him international acclaim and recognition, as well as a slew of intellectual admirers.

By the 1690s Newton was in his fifties and had never displayed any desire for marriage or companionship. He began a close friendship with Nicolas Fatio de Duillier, a Swiss mathematician, around that time. When the relationship seemed to implode in 1693, Newton was greatly affected and had a nervous breakdown. He proceeded to send letters that made him seem unhinged to friends like John Locke, blaming them for constantly trying to complicate with life with women.

In his later life Newton also explore a number of religious essays, called tracts, and dissect their symbolism in relation to the Bible. Scholars are divided in assuming that Newton's questioning was an indication of his disbelief or merely the next logical step in his career of analyzing the questions that appeared to him.

Newton wrote two texts, The Chronology of Ancient Kingdoms Amended and Observations Upon the Prophecies of Daniel and the Apocalypse of St. John, during this time period. Both were published posthumously. He spent a great deal of time continuing to explore alchemy and sat on the Parliament of England at Cambridge University.

In 1696, Newton took the role of warded at the Royal Mint in London. His responsibilities included the great recoining of England, and he was the most notable Master of the Mint in its history. He noticed a large amount of coins were counterfeit, a crime that was high treason and punishable by a gruesome death sentence. Newton spent time investigating possible counterfeiters himself and became a justice of the peace, prosecuting 28 "coiners" himself.

In 1703 Newton was appointed the Royal Society President and a member of the Academie des Sciences in France. He was knighted by Queen Ann in 1705, a great honor and a possibly politically motivated event.

In his old age Newton moved in with one of his nieces and her husband. He was in declining health, later speculated to be the result of mercury poisoning acquired from his fascination with alchemy. He passed away on March 20, 1727, in his sleep and was interred at Westminster Abbey.